Check out the newest episode of STEM at Home with Mr. Bell where we take on a new challenge.

Will This Become the Reform Education has been looking for in: Effecting Change at School and District Levels and Beyond

The profession of an educator has been one of isolation for too long. Teachers have worked mostly independently, in both their classroom and lesson planning. Over the past few decades, the tides have been slowly turning though with the role of educators and PLCs, collaboration, and teacher communities and associations are becoming more of the norm. The internet has brought educator creativity to Pinterest and Teachers Pay Teachers. Yet, despite all the efforts, there have still been more calls for working together.

Then over the past couple of weeks, the world changed with the outbreak of COVID-19. Isolation and social distancing became the norm. Teachers may have been one of the best-prepared professions for this. Working alone, at home and providing for students with educational and emotional support. Teachers are not doing this alone though. Resources have been shared all over the places. You can not scroll far on social mediane virtual meetings being held, and online-based resources being shared by the hundreds. Students are home learning with four weeks of printed off packets made in a matter of just hours. E-learning school is being hosted by teachers while taking care of their own families at home,  all at the same time.

One day soon this pandemic will be over with. How will this moment change education? Will the network of sharing resources, ideas, and practices continue? This may be the beginning of how education is done in the United State or change the way teachers work together. Whatever happens in the days, weeks and months after, be ready for a revolution in education, one of which is well overdue. The time is ripe for reform. May this not be the end or return to the same, but yet the beginning of something new.

Check out the first episode of STEM at Home with Mr. Bell!

If your K-8 student is out of school for COVID-19, I have created a page of resources for your keep them learning at home. The activities include math, reading, science, art, and STEAM. Some of the activities require a parent/adult setting up an account. Others require a teacher account setup first, which I have already taken care of. I will be adding more material over the coming days and weeks.

If you have any questions or suggestions, please let me know in the comments section or through one of my social media platforms. Stay healthy and keep your chins up. We are experiencing a time and situation like never before, but together we will come through stronger. Keep looking out for each other.

KEEPING UP WITH GLOBAL COMPETITION

On October 4th, 1957, the Soviet Union launched the satellite Sputnik, the first-ever human-built object into space.  This event was a defining moment for the United States, in correlation with both the Cold War and the space race and has been referred to as a Sputnik Moment. Two months later, on December 6th, 1957 the United States attempted to launch their first satellite into space but the fuel tanks on the rocket that was to send it in off the earth exploded. This became a moment of “science awakening” in the US, changing the course of science education.

Today, we look for the next Sputnik Moment, to change the direction of science education with policy, support and funding. There have been many moments that looked like they could be the next opportunity for us to change the course of science education. From the war on terror to climate change, to the most recent outbreak of Covid-19, which time could still tell if this is that moment. As large of an issue that climate change is across the world and the possibility that this could be that moment, it has not seemed to be the case, at least in the United States. While some believe we will not be able to engineer or science our way out this, there are ways that the field of STEM can slow down and perhaps reverse the effects of climate change. Investments in STEM fields and education can work to find alternatives to the damage that is being done. The response to Sputnik started with the work of the military but then progressed into the formation of NASA and involved over 400,000 people and 20,000 companies involved in the race to the moon. Every dollar spent on the program was spent right here on earth, as was every investment into STEM education. The same would be true with the issue of climate change. Any money spent to invest in renewable resources and protect life on our planet would be done so here on earth, benefiting the people of earth With the US withdraw from the Paris Climate accord we are getting left before in the issue of climate change, both financially and in aspects of infrastructure. Fighting climate change as the next Sputnik Moment would involve everyone, on every level and could change the direction of life on earth.

Burke, S. & Squassoni, S. (2014, December 22). Why climate change isn’t a sputnik moment: military technology can’t innovate us out of this one. Slate.com Retrieved from https://slate.com/technology/2014/12/climate-change-isnt-a-sputnik-moment-why.html

I received the exciting news tonight that the project to begin a Lego Robotics team at my school is now fully funded! Thank you! Thank you to the Charles M Gates Jr. Foundation for helping to finish our project funding off! Thank you to the anonymous donor who matched every dollar! And of course, thank you to the individual donors, many who have given to every project for my classroom! 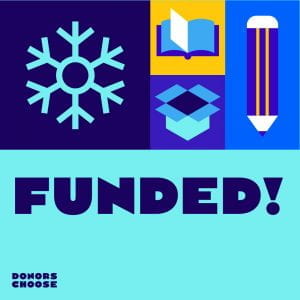 Human Impacts on the Environment: Overpopulation

Overpopulation is one way that humans are impacting the natural the environment. The cause of population growth throughout the world is because of advancements in science but this has also caused other unintended issues. In the year 1900, the world’s population was around 1.65 billion people, but by the year 2000 the world had surpassed 6 billion people on earth and it is predicted to pass 10 billion by the 2100. The growth in population and quality of life at birth through death has been contributed by advancements in medicine, access to food, water, education and health care. At the same time though people take up a lot of resources and space. With booming growths in population there is the need for more  food production, more use land and more use of natural resources. It is great that we have found ways to better the lives of people but its coming at a cost to the earth. However, some studies have found the rate of population maybe slowing down thanks to advancements in the quality of life. One example is with more women working today in professional careers than were 100 years ago, families are having less children than they were before. One study out of Finland recently found that having just one less kid reduced a families average by 58.6 tons of CO2-equivalent emissions per year. Who ever thought having less kids could make you more environmentally friendly?

Mortimer, Cathrine (2017, July 12). Having children is one of the most destructive things you can to do the environment, say researchers. The Independent. Retrieved from https://www.independent.co.uk/environment/children-carbon-footprint-climate-change-damage-having-kids-research-a7837961.html

Students today are preparing for jobs that have yet to even be created. This makes education and preparation challenging, but in my STEAM class, we are learning skills and solving problems to prepare our students for the world to come.

Having this opportunity for my students will give them experiences in coding, engineering, as well as in teamwork, problem-solving, collaboration and communication skills, self confidence, and a sense of belonging. This would be our school’s first robotics team and would be an open door to many opportunities for students. 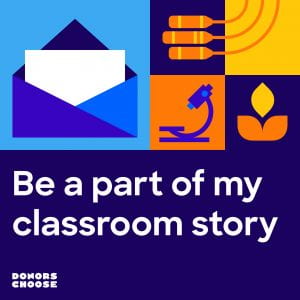 My newest Donor’s Choose project is now live and I so excited about this! Through this project, students will create, produce and host their own podcast, sharing the work of those in STEM fields. The tools in this project will allow students to work in innovative and creative ways in new forms of media through audio recording. Students will interview and share knowledge about topics related to their local community through the field of STEM with each podcast! 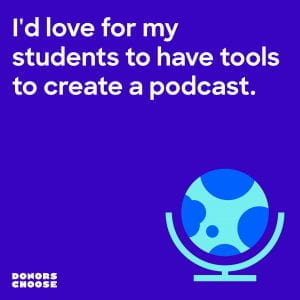 All views expressed on this website, in posts by website’s author, and on pages published by the author are the authors own and do not represent any entity whatsoever with which the author has been, is now or will be affiliated with.

Check out the newest episode of STEM at Home with Mr. Bell where we take on a new challenge.

Will This Become the Reform Education has been looking for in: Effecting Change at School and District Levels and Beyond